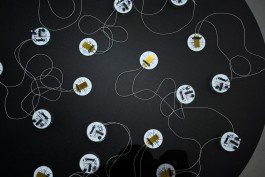 Energy harvesting, or "harvesting energy", is when small amounts of electrical energy are obtained from sources such as ambient temperature, vibrations or air currents. After various experiences of nanogenerators, the focus of my work is on the generation of energy with the piezo effect. Inspection Deformation of a piezo crystal as a result of a force exerted by tensile or compressive loads are carried out which can be measured as electrical voltage at the electrodes of the piezo element. This phenomenon is influenced as a direct piezoelectric effect. The aim is to develop objects and life forms that expose ourselves to the public existence of potential energy in our everyday lives. The energy accumulated over time will manifest itself after a time in a tone and a light pulse. This is the name of small life forms that feel self-sufficient from energy.

As Energy Harvesting, which translates "harvesting of energy", the production targets smaller amounts of electrical energy from sources such as ambient temperature, vibration or air currents. The so-called "nanogenerators" were introduced. A collection concept for small and small energy converters. The idea is to harvest energy from your immediate environment. The first example of a functioning Energy Harvesting System from the year 1928 is the atmospheric clock of Jean-Léon Reutter, which uses the fluctuation of air pressure, utilized by the temperature for the drive of the watch. Prof. Dr. Peter Woias, Professor of the Construction of Microsystems at the University of Freiburg writes: “In the end, if you go back for 200 years, then the energy sources we had were those available in the environment. This was essentially hydropower or even wind power. Only with the addition of fossil fuels has it begun to use stored energy - and that is how we focus to date. Today, Energy Harvesting is in itself a very old technique that we are now rediscovering. And we in Freiburg are consciously calling it Micro Energy Harvesting."

After various experiments on nanogenerators, my focus is on the energy extraction with the piezo effect. Through mechanical deformation of a piezo crystal due to a force effect by train or pressure, charges are generated which are measurable in the electrodes of the piezo element as electrical voltage. This phenomenon is referred to as a direct piezoelectric effect. The goal is to develop objects and their own forms of life that, with their ubiquitous existence, expose potential energy to our everyday lives. Potential sources of energy are everyday objects with their vibrational properties. This existence is to be displayed with self-developed objects in the form of visible, audible and sensible vibrations and to allow communication between the objects to arise. That about the time accumulated energy manifests itself in a tone and a light pulse after a certain time. Thus arise small "forms of life", which feed themselves autark of energy.

The installation capacitive body Nº 2 is a light system that reacts to the sound of its environment. Sensors are used to measure vibrations of architectural solids in a range of low frequencies. These oscillations are triggered by surrounding ambient noise caused by trains and cars. According to the values of the measurement light flashes are generated. The stability of this nervous system gets to an end where it collapses and restarts again. A dynamic light space is thereby created, which creates a visual feedback of the aural activity around the installation.

A winged world spirit would deem it a paradox, if not even irony: In a time of constantly accessible information and uniquely comprehensive knowledge people seems to have lost their capacity to wonder. It seems that with every step we place into a wondrous and unfathomable world, something of the mystery that brings us to life as human beings is irretrievably lost. When Martin Heidegger set down the wisdom that the things ontically nearest and most familiar to us are simultaneously the things ontologically most distant, most unknown and overseen by us he put the case for a long-lost phenomenology of amazement. The things most common escape our attention. It is said to be the task of art to make us encounter the seemingly familiar in such a way again that we experience the world not differently, but entirely anew; that we may marvel at it, feel it and taste it again.

Light may count among the things most familiar to us. Luckily, there are artists like Martin Hesselmeier who may remind us by way of his reactive light installations that it is worth observing things closely – most of all if one thinks that one has seen it all.